In Sacramento, I stuck to a mostly vegan, whole-food diet that was almost entirely produce. This summer, I’ve had to make some modifications. I’m eating more carbs because they are less perishable and I’ve had to incorporate fish and eggs. I’m training for an event in October and found I was losing muscle mass and strength in the first half of my summer trip. I added eggs and more fish to my diet and immediately saw improvement. This is a typical day’s diet: 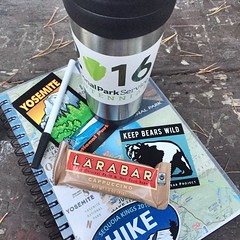 I start the day with coffee and a Larabar while I write my Morning Pages. I won’t eat breakfast until I’ve written in my journal and completed my workout. 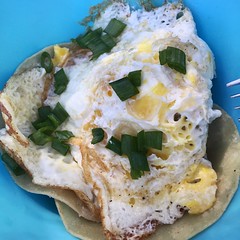 Breakfast was my High Protein Crunchy Granola for the first part of the summer, but I’m now eating 2 or 3 eggs and a corresponding number of corn tortillas fried in coconut oil and salted. Sometimes I add green onions or avocados. 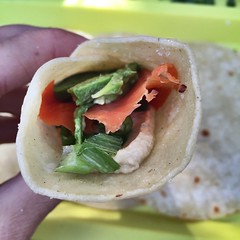 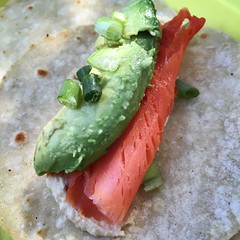 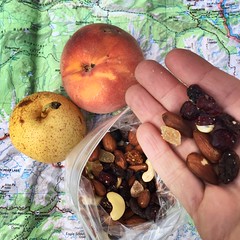 I pack trail mix and fresh or dried fruit into my pack to eat before, during, or after lunch. 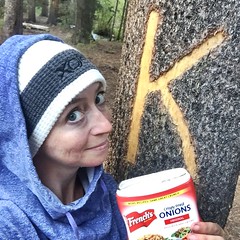 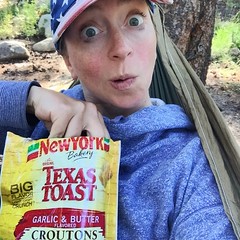 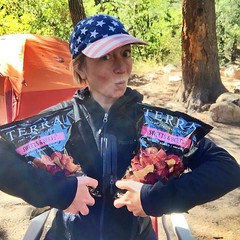 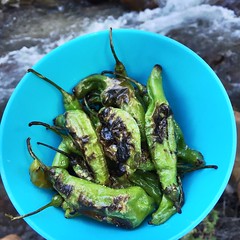 I crave salty, crunchy snacks after a hike. On my least healthy days, that means french-fried onions or croutons. (I know these foods are terrible for me. It’s an addiction.) When I have more nutritionally sound options, I eat Terra chips (Sweets & Beets** are my favorite) or I make blistered shishito peppers (well salted, of course). 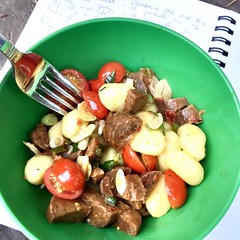 I follow this formula for dinners: protein + carb + veggies (if I have any). This is usually expressed as one of the following meals:

I dress the first two options in lemon juice, olive oil, and salt or pesto sauce.

Even with the extra protein, most of my calories come from fat and carbs because these things don’t usually require refrigeration. I wish it were possible to eat more produce, but it spoils so quickly, cooler space is limited, and preparation is difficult without a real kitchen. I eat almost no added sugar. I eliminated most sugar from my diet last spring because of issues with hormonal acne. My diet is also fairly low in wheat (except for those croutons!) I’m making the best of things and trying to make healthy choices.

What do you eat while on a long camping/hiking trip? 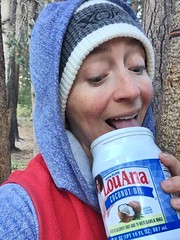 It took me less than 11 weeks to consume this entire container.
*Peanut butter and tofu roll-ups are good. I pretend they're Thai-inspired. I haven’t tried peanut butter and avocado, but I’m game. I don’t think I could bring myself to eat peanut butter and smoked salmon.
**WHY can I only find these unsalted? It’s an easy fix with my salt shaker, but creating salt-less chips is just sadistic.
6 comments: 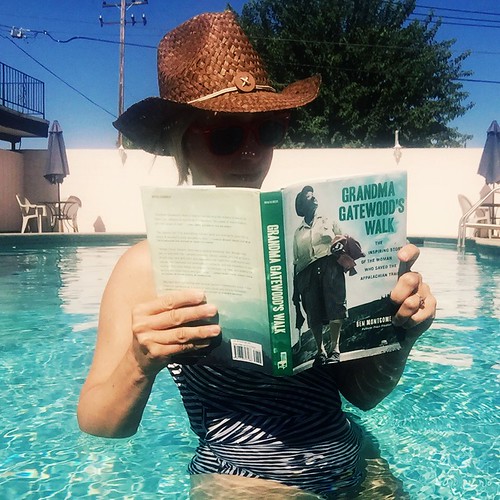 The most interesting question one can ever ask is: “Why?” It yields the most interesting answers. What, who, when, where, and how reveal facts, but why gets at motivations, relationships, and fundamental truths. So, why did Emma Gatewood, at 67, walk the entire 2,050 mile Appalachian Trail? Why did she go alone? Why did she tell no one she was going? Why did she persevere through hurricanes, lack of shelter, and injury? We’ll probably never know.

Grandma Gatewood’s Walk chronicles the what, who, when, where, and how of Emma’s journey through her journal entries, family interviews, and the accounts of those who met her along the way. She was 41 years dead when this book was written, so the author had no opportunity to ask her why she’d done it. In interviews during her walk (and second walk on the AT and subsequent long hikes), she always evaded the “why” question with a pat answer. “I’m a great lover of the outdoors.” “Just for the heck of it.” “I decided to take a walk - one I always wanted to take.” “I thought it would be fun.” None of the answers are satisfactory.

Maybe it was because, in her decades-long marriage to an abusive husband, the woods were the only place that made her feel safe. Maybe it was, after raising 11 children, she just wanted to do something for and by herself. Maybe it was an act of defiance against the inevitability of aging and physical decline.

Similarly, I don’t have a good answer for the “why” of my own wild summer. Maybe I’m revisiting the happy days of my youth. Maybe I’m rebelling against our overly complicated and industrialized lives. Maybe it’s my own way of saying “fuck you” to getting old.

As any six-year-old will tell you, if you keep asking “why,” you eventually get to an answer of “I don’t know.” And maybe that’s the real appeal of why. It’s the one question that eventually gets to the mysteries of the universe. It’s the one question that leaves us wondering and speculating and imagining. Spend a few days reading Grandma Gatewood’s Walk for the facts of her remarkable journey and then spend the rest of your life wondering . . . “why?” 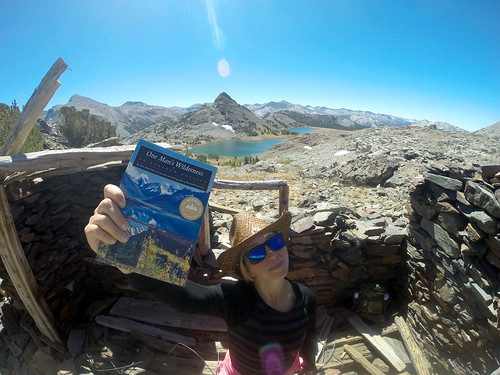 In our current renaissance of homemade and homegrown, One Man’s Wilderness is as in touch with the Zeitgeist as when first published in 1973. At 51, Richard Proennneke arranged to be dropped off in the Alaskan wilderness, alone, with nothing but hand tools and a few supplies. He began building his log cabin on May 22nd and had it complete with moss-topped roof, stone fireplace, and dutch door by the end of September. The book continues through the long winter and following summer until he returns to the Midwest the next autumn to care for his aging father. In the meantime, he builds a cache (an adorable replica of his cabin, but on stilts), makes everything from hinges to dishes with empty gas cans, and attempts to domesticate a wolverine.

I must admit, I was in constant awe of Dick’s skills, strength, and stamina. He seemed capable of building and fixing anything. I had trouble following all the engineering details of even building a simple log cabin. My back ached as he described packing a ram down the mountain in two heavy loads. I shivered in the Yosemite summer evening as I read of his winter outings at negative thirty-four degrees. He makes my summer adventure seem about as daring and complicated as a trip to Disneyland.

I admire Dick, but his experience was so far beyond my own that I didn’t identify with him until one of the last chapters. In the "Reflections" chapter, I found myself nodding in agreement with Dick’s observations on possessions, physical activity, and eating habits. As dissimilar as our actual experiences are, I've come to some of the same conclusions as Dick about modern life.

Possessions: although this book was written forty-three years ago, Dick had already identified Americans’ surplus of “stuff.” He was perfectly content with the $40 of supplies he had flown in and everything he had built with the trees and stones of the land. I’ve been similarly satisfied with the items that fit in my car for the summer. I don’t miss my wardrobe, kitchen, furniture or any of the knickknacks that fill my house. I wonder what Dick would have thought of all the electronic toys that fill our lives, today. I am grateful to have my laptop, phone, DSLR, and GoPro with me, but don’t miss the television one bit. Dick wasn’t a total Luddite; he did bring binoculars, a spotting scope, a tripod, an 8mm movie camera, and a 35mm reflex camera. But who needs all that other crap? Thinking about all my “stuff” at home makes me feel claustrophobic. I have plans to lighten my load when I return and purchase less.

Physical activity: Dick found great satisfaction in the daily physical work of providing for his own shelter, heat, and food. How many of us can say that we built our own houses, chopped our own wood, and grew/hunted/fished our own food? Of course, one of the benefits of modern society is that we don’t have to do these things and, instead, can focus on higher pursuits like science, art, and the general betterment of the human race. But that lack of physical connection to our daily needs leaves us fat and unsatisfied. There’s a balance to be found and Dick’s story has inspired me to outsource less of my own daily maintenance. I am planning to ride my bicycle more and maybe even grow some food.

Eating habits: Dick’s diet was pretty much the same every day. It consisted of oatmeal, beans, fish, game, and sourdough pancakes or biscuits. For variety, he had blueberries, cranberries, fireweed greens, and the odd vegetable he grew in his garden. It was a limited diet, but he didn’t mind. He just “season[ed] simple food with hunger.” I’ve been hiking an average of nine miles a day and, even with that level of activity, I inwardly groan when I’m confronted with the fourth dinner in a row of gnocchi with pesto and vegan sausage. We modern people have been conditioned to expect variety and excitement with every meal. But maybe we need to view food as fuel instead of entertainment. Again, there’s a balance to be had between monotony and complaining that you just had Mexican food for lunch yesterday.

One Man’s Wilderness is aspirational, but it’s inspirational, too. The actual events of his Alaskan adventure are nothing I feel I’ll ever be able to replicate (I won’t be field dressing a mountain sheep - EVER), but the lessons learned are applicable to anyone’s life.