Holy cow. Rehearsal lasted eight hours today. We had costume parade, ran tech, and then rehearsed the show one and a half times. 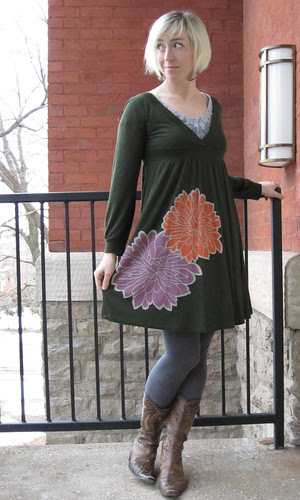 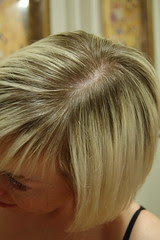 I used to have long, wavy, red (colored) hair. Last June, I whacked it all off and bleached it to a white blonde. I maintained that look until October, when I decided I wanted to grow it out, leaving the roots dark, like Tieka.

This isn’t a popular look. It’s a fringe trend and the kindest way I’ve heard it described is “ombre hair.” I like it. It’s a bit edgy and definitely bold. I’m a fan of extreme hair.

The growing out process, month by month:

I’ve had trims along the way and, in December, I had the roots highlighted to break up the root line. In February (just yesterday!), I asked my stylist to cut more bangs. (My current director has repeatedly told me that my hair obscures my face on the right side.)

I’ve never been a fan of my natural color. It’s always been a blah dark blond (or is it light brown?) shade. I’m interested to see if I like it more with the contrasting ends and the random grays.

We’ll see if this experiment last past May. I may be asked to color it for my next show. I’m playing Whitney in A Piece of My Heart.
10 comments:

Email ThisBlogThis!Share to TwitterShare to FacebookShare to Pinterest
Labels: hair

I wasn’t really loving this outfit. It was comfortable, but the striped top tends to “grow” during the day and become baggy. I’ll have to try it with a more fitted bottom, next time. 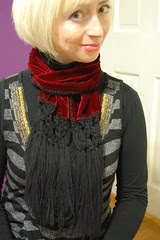 I did like details of the outfit, if not the overall shape. The scarf added a nice dose of color. The tank’s neckline is embellished with gold and silver beads. There was a bit of subtle pattern mixing with the horizontally striped top (and socks!) and the vertically striped pants. The gray booties turned out to be the perfect height for these very long pant legs (and comfortable for some shopping at the mall after work).

I’m smiling because I got my hair cut this evening. Good hair can save even the worst outfit day.
4 comments:

Despite my theater antics and costume-y work wear, I’m not the least bit dramatic. I’m generally calm, level-headed, and pragmatic.

I’m trying out an all-day lipcolor for the play. I usually have to reapply my color between scenes because my face somehow eats lipstick. I also tend to get it all over my chin. (I make some God-awful faces on stage.) In Comic Potential, I have to make kissy-face with another actor (my friend’s husband…awkward!), so I really need a lipcolor that will not budge.

For rehearsal last night, I tried Covergirl Outlast All-day Lipcolor in Ever Red-dy (#507). I followed the directions: letting the color dry for 60 seconds and then topping it with the moisturizing topcoat. I found the product surprisingly comfortable and the color didn’t fade or smear - not even after sleeping with it on. The color you see in these morning photos is from the night before! It’s a little dramatic for work, but I’m too lazy to take it off. Besides, I’m curious to know just how long the red will last.

I’m trying not to get all dramatic and pouty about having to wear a blazer over my outfit at work. It’s just too cold in my office without it. After teaching aerobics at lunchtime, I was briefly overheated and blazer-less, but I had to cover up for most of the day.

Speaking of dramatic, here are a couple of Comic Potential promotional shots. We aren’t wearing costumes, except for Barbara. She’s wearing a custard pie. 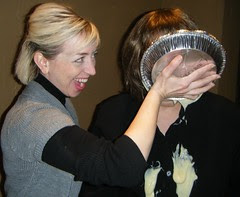 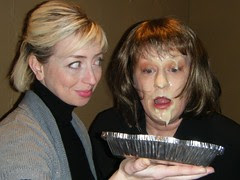 I get to smash pie in her face every night!
26 comments:

I hear this spring’s palette will be full of pastels. I’m not objecting...much.

Last March, inspired by an InStyle feature, I experimented with combining a few pastels: lavender, blush, peach, and sky. They were paired with shades of gray. I enjoyed the results. I like pale colors well enough, but I don’t often think to wear them with one another. Will you be wearing pastels this spring? 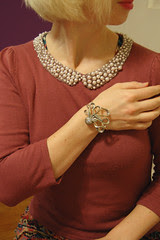 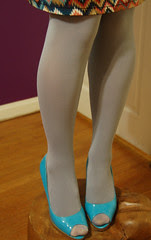 I’ve always been a reader. I didn’t have a large collection of books as a child, so I reread my favorites over and over again. I probably first read The Water-Babies in third grade. While I was an ambitious reader, I tended to just skip over the longer words, so it took me many readings and years to realize the significance of the names of the two fairies in the story: Mrs. Doasyouwouldbedoneby and Mrs. Bedonebyasyoudid. (I merely thought of them as Mrs. D-- and Mrs. B-- .)

If I were to meet Tom under the sea and have a style adventure, I’d be Miss Doasisaynotasido. Never wear black and navy or brown and gray together. Never break up the leg line. And, at all costs, avoid horizontal stripes and any embellishment that adds bulk to your bum. 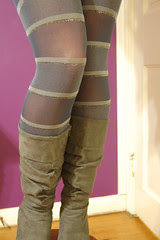 Let’s be honest, even on the most stick-like of legs, loud tights can create the illusion of extra bulk. Horizontal stripes, argyle, and sparkles are the worst offenders. My usual solution is to wear the craziest of my tights with boots, so that less of the leg is visible. Now I can enjoy the stripey goodness without looking like I have inflatable calves.

My legs will be getting plenty of exposure in Comic Potential. My costumes are a nurse dress, a sundress, a cocktail dress, and a nightie. Nothing comes to below the knee. While wearing the nurse uniform, I’ll be carried around, flung onto a bed, and dancing.

It’s best that I rehearse in a dress to be sure I don’t expose more than my legs once I’m wearing the costume. 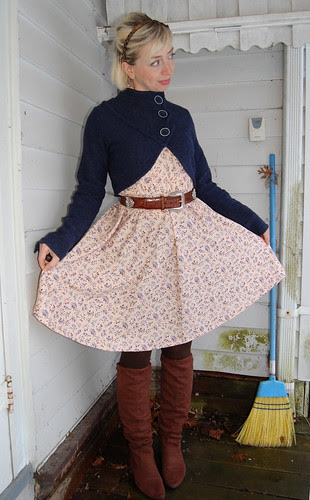 This is a family show, people!
Well, except for the foul language and sexual references.
15 comments:

I’m delighted that we are seeing highs in the 40’s this week, which finally makes it possible to wear some of the short-sleeved items in my wardrobe.

Dress, homemade (not by me – but from a swap). Skirt, Newport News. Boots, Nine West. Scarf, World Market. Bracelet, swap.

I adore this, newly swapped and then shortened, dress (worn as a blouse today), but its colors don’t play nicely with my complexion. One of my regular “tricks” in a situation like this is to introduce another, flattering color, near my face. 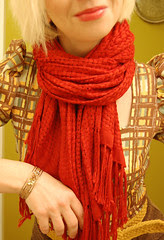 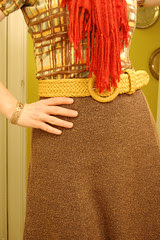 The dress has the prettiest sweetheart neckline. The fabric is a bit on the thin side to wear unlayered in February, but it works nicely as a slip.

I forgot to color correct for the yellow light in this hallway, so you get extra buttery pics, today.

What’s the point of having blog readership if you can’t use it to forward your personal agenda?

Come see my latest show next month; I play the actoid, Jacie. See if you can spot items from my own wardrobe in the production! 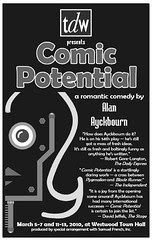 Jacie Tripplethree appears to be the perfect woman. She's a beautiful actress with an uncanny sense of humor and perfect comedic timing. No wonder Adam, an aspiring television writer, wants to build a series around her. The problem? She's an actoid - a robot designed specifically for acting - and the studio believes that her unprogrammed sense of humor is a defect that needs to be removed. While Adam fights to preserve Jacie's consciousness, he finds himself beginning to fall in love with the charming robot. Will Adam get the green light on his series? Will robot love prevail? Will Jacie win her fight for actoid rights?

I feel as if I’ve been partying all week. After drinking an entire bottle of Veuve Clicquot on Monday (my excuse: I was snowbound!), I spent the rest of the week booked every day from 7 a.m. until 10 or 11 p.m. Mardi Gras is rough.

Erin Fancy Pants attended Mardi Gras in Mobile earlier this week and brought me some souvenirs. Among them were two Moon Pies – chocolate and orange. While Erin personally recommends Moon Pies for breakfast, I found them unbelievably vile.

Cincinnati, like New Orleans, is a Catholic town. On my first Fat Tuesday in Cinci, my boss brought a king cake into work. Other than the unsanitary and potentially dangerous practice of hiding a plastic “baby” in the cake, I enjoyed that Mardi Gras treat.

Since Reedie jinxed me, my color theme was noticed again today, at work: “You look like a king cake.” Well, that’s a hell of a lot better than looking like a Moon Pie.

Originally, I was going to call this post “Bourbon Street.” I even had a poem to go with the title:

Bourbon Street
Got no feet
Give me something good to eat
Not a Moon Pie
I’m not gonna lie
I’d rather have a Cadbury Crème Egg
In fact, that’s what I had for breakfast
Which is why this poem is so shitty

Well, that’s as far as I got with the poetry. These pants are so long and wide legged, it sometimes looks as if I have no feet. Proof that they are under there: 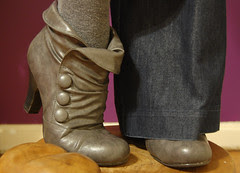 I’m departing from the day-of-the-week titles* and further references to Lent. Instead, I’m wearing feathers in my hair and having a good time. 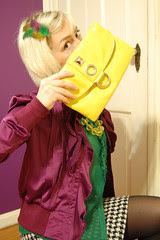 I had too good of a time last night, at Last Call Trivia. I had to Photoshop away my bloodshot eyes and undereye bags this morning.

Reedie asked if my theme weeks are ever noticed at work. I’ve conducted 17 theme weeks and never gotten a comment until today. Must be the Mardi Gras feathers. 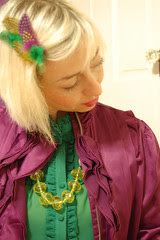 I’ve never been to Mardi Gras. Does it involve Feats of Strength, like Festivus?
Although the snow is nearly up to my knees, I can’t help but have a good time tromping through it in my star-print galoshes.

*I was tempted by Thsilly Lithsp Thursday. I have a lisp, myself.
11 comments: