I last went snowshoeing 21 years ago and it was one of the worst experiences of my life.

Eager to being my “life of adventure,” I signed up for the Outdoor Center’s winter camping excursion my freshman year at college. Until that point, my camping experiences had only been as rustic as a tent trailer (with my family) and I’d only seen a few winters with snow. However, I was eighteen years old and undaunted by my lack of experience. I rented or borrowed nearly every piece of gear and clothing and headed to the mountains. I had no idea what to expect . . . except snowy adventures!

Early Saturday morning, we students and the gear were packed into a van and driven into the Cascades. There, we hefted our packs and hiked up a snow-packed road to our camping destination, an ice-bound lake. Once we arrived at the lake, the deep snow required that we don snowshoes and we all happily tramped atop the white fluff. It was a winter wonderland. We breathed in the clear, cold, mountain air and marveled at the sparkling landscape. 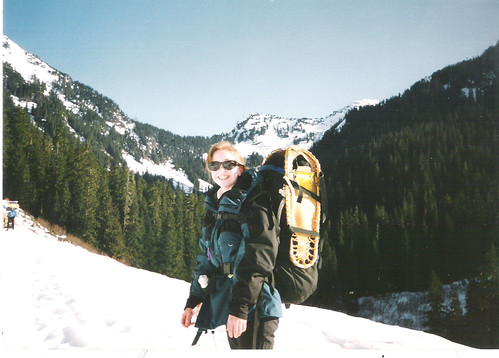 Our leader, Cedar (yes, that was his name), demonstrated how to dig a snow cave. I was dismayed to find that this took a REALLY. LONG. TIME. By the time he was done, it was dark, and we certainly weren’t digging any more caves. However, I was lucky enough to be selected, along with another girl to sleep in the shelter! We were assured that, thanks to its design and the insulating properties of snow, we would be far warmer than anyone sleeping in a tent.

To enter the cave, one squirmed, downhill, into a hole, and then up an incline into a space large enough for two sleepers. The cave was bi-level: a “floor” that served as the entryway and storage and a bench wide enough for two sleeping bags. An air hole ensured that we didn’t suffocate in the night. Our warmth would be trapped inside the cave, creating a cozy little ice nest.

I was certainly looking forward to the nest. Once the sun set, temperatures had plummeted. I was nearly too cold to eat dinner and certainly too cold to remove the clothing necessary to pee. Wearing all my clothing, I wiggled into the cave and my sleeping bag. Tired from the day, my companion quickly fell asleep, leaving me to wonder when my shivering would stop.

It turns out that “cozy” in a snow cave means 32 degrees. My hodgepodge of borrowed and rented gear wasn’t adequate for a freezing night. The cold from the icy sleeping platform penetrated the pad, the bag, and my clothing. I rolled and twisted, trying to minimize my contact with the ice. The cool air managed to find its way into my cinched sleeping bag hood and down my neck to further chill me. I suffered, awake, until a few hours before dawn. At that point, the need for warmth (and bladder relief), drove me out into the night. I strapped on the snowshoes and stomped circles around the lake until the sun, and the rest of the camp, rose. 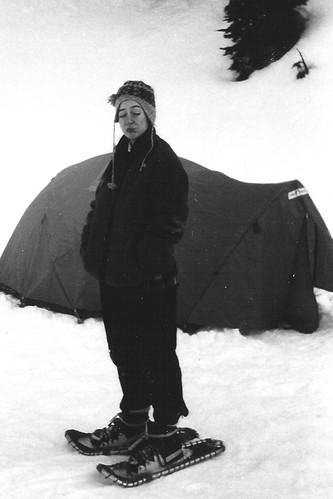 The snowshoeing, a magical adventure the day before, had become a drudging chore. It barely warmed me and mostly just tired my hip flexors. The other campers emerged from their tents (or, in one case, an igloo), lingered over granola mixed with water, and exchanged tales of their warm and toasty nights. I shuffled on, crankily stomping around the lake, wondering, “Is it time to go, YET?!”

When we finally packed up and left, I was one of the first down the mountain. The best part of the trip was falling fast asleep, squeezed between two other hikers, as the van’s heater blasted warm air.

It’s taken over 20 years, 2 dogs, and 1 cross-country move to convince me to try snowshoeing, again. This is my third winter in Sacramento. I’m only an hour or two’s drive from some of the best outdoor winter recreation in the country. This is shaping up to be a snowy year in the Sierra and I don’t just want to gaze at those snow-capped peaks, I want to be on them.

I considered buying a season pass and skiing or snowboarding, but resorts aren’t fond of dogs on their slopes. Beefy and I have talked about cross-country skiing, but I also tried that in college and found it even more tiring than snowshoeing. (And it requires a degree of balance that Beefy claims he doesn’t possess.) Sledding is probably best left to children and those with rubber bones. Our final winter option is snowshoeing. It’s dog- and Beefy-friendly.

I’m imagining our little family on a sunny, Sierra, winter day. We are surrounded by evergreens, negotiating a fluffy white track. Beefy and I whisper along on our snowshoes. Jasper and Jackson bound alongside, delighting in the cold, sparkling powder. We stop to drink hot cocoa and throw snowballs to the dogs. It’s not an impossible dream.

I’m starting the snowshoe adventure again with the grownup’s version of the college outdoor center: REI’s Outdoor School. I signed my sister and I for a Snowshoe Picnic shortly after Christmas. According to the class description, “We will snowshoe a short ways to our cozy camp. There, [we] will enjoy a delicious meal, hot drinks, roast marshmallows for s'mores, and enjoy the winter wonderland that is the Sierra!” I’m hoping there is zero chance of us sleeping in a snow cave. 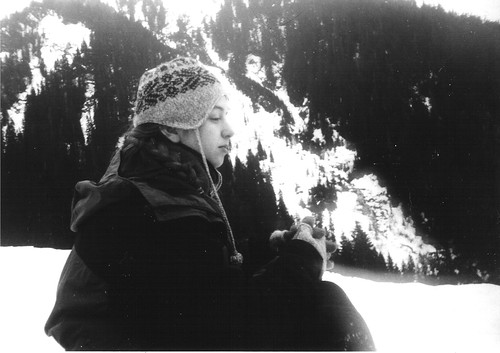 Email ThisBlogThis!Share to TwitterShare to FacebookShare to Pinterest
Labels: 40 B4 40, flashback

When I worked at the North Face, one of the athletes was Cedar Wright- wonder if it's the same guy?! I too did a cold camp out and for this Texas girl it was enough to say never again!

I THINK that's a different Cedar. Maybe it was a popular baby name for the hippies in Washington state?

Great story, hope you newest snowshoeing adventure is all that you dream it is! :)

I love xc skiing....maybe try it again after all your running adventures?