Ask the Muchacho: Answers, Round 1

When Kasmira asked me if I wanted to make a guest appearance on her blog to answer reader questions, I jumped at the chance. My own blog doesn't really lend itself to a consistent readership (what with the dirty mouth and the unfocused content and all of those effing elipses...), so the prospect of an audience was too delicious to pass up. Possibly making Kasmira blush was an added bonus.

Kasmira has given me a word count for each installment for the sake of brevity. I will answer everyone's questions in the order they were posted. There are repeat questions, so I'll answer them the first time they appear.

Sabrina asked...
How long will it take Kasmira and her boyfriend to visit her favorite sister and freakin' adorable niece and nephew? Why do we have to learn about major life happenings through her blog instead of a phone call?

Beefy Muchacho's Answer:
Uh wow... Awkward right off the bat.. . Hi Sabrina! I can't really speak for Kasmira's methods for revealing information... All I can say is that she hates talking on the phone. Like.. really hates it. You should call her. (I hope you're laughing.)

Marley asked...
Your blog is hilarious! How did you two meet? Where are more pictures of Walt and Roy (yes, I miss kitten pictures)? Do you enjoy fashion?

Beefy Muchacho's Answer:
Thank you for checking out my blog! Kasmira and I met while we were both working on a local community theatre production of “Messiah on the Frigidaire”. (I was in the show, and she coordinated the props.)
I wouldn't say that I “enjoy” fashion. I'm definitely not fashionable in any way, shape, or form. On the other hand, I love Kasmira's fashion, and I like that she enjoys it so much.

As for Kitten pictures... Let's face it... they're not as cute when they're bigger, so there aren't as many pictures.... Kidding... It's more a combination of us both being really busy with this last show and vacation, and the kittens being slightly less cooperative (due to their budding insanity). I don't remember if she's ever posted this one, but it's my favorite: 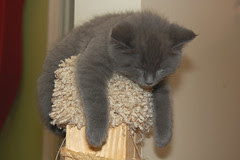 This is Walt after a particularly hard day of playing when he was still a tiny kitten
Tiffany asked...
Question: does she ever criticize your outfit choices and try to push her fashion agenda just a little too much?
Beefy Muchacho's Answer:
Kasmira has really never criticized anything I wear, probably because she realizes if she started we'd never have time to do anything else. I'm pretty much a jeans, polo shirts, sweaters, and baseball caps kind of guy.
Kelly said...
If you had a night free to hit downtown Cincy, what would be your must-dos or must-visits?

Beefy Muchacho's Answer:
I guess it sort of depends on what you're into, but food-wise Nada on the corner of 6th and Walnut is pretty excellent (especially if you like guacamole). If you're willing to walk a bit, crossing the river to Newport (Kentucky... I know... ) can be cool. The Monmouth Theater has a couple of different resident theatre companies, and usually has something interesting showing at a reasonable price. Also, an awesome Mexican restaurant is right next door. It's called La Mexicana. It's the only place I know of in the area to get cow brain tacos. Seriously. Cow. Brain. Tacos.
Lorena asked...
- Is there an OUTFIT of Kasmira's that you would REFUSE to go out with her if she wore ?
- When is she dying her hair again ?
- Has she tried to change your style preferences ? Maybe wants you to wear skinny jeans ?

Beefy Muchacho's Answer:
I can't think of an outfit of Kasmira's that would make me embarrassed to be seen with her. She's always far more put-together than I am. No skinny jeans for me, either. Even if there was an outfit I didn't like, it wouldn't make a lot of difference... I can't think of a time she wore the exact same combination a second time (except for her Blogoversary outfit).

I have no idea when she's dying her hair again... She seems to really like the shorter blonde. I can see it being this way for a while.
nanzy girl asked...
How long DOES it take for her to get dressed in the morning? Does she ever ask you for opinions on an outfit?

Beefy Muchacho's Answer:
It really doesn't take her that long on a day-to-day basis, because she's the most organized person I know when it comes to her wardrobe. She usually takes about an hour or so once a weekend to plan her outfits for the week. She calls it “Fashion Show” and she pretty regularly asks me for my opinion during. Because of this, her time during the week is much, much shorter than you'd expect.
Julia said...
I want to know about her personal life. Yes, I'm that girl. Totally inappropriate and intrusive. Tell us the story of how you two met!

Beefy Muchacho's Answer:
As I mentioned earlier, we met during a community theatre production last year, but to be honest we didn't really talk much throughout the whole experience. I was kind of intimidated by her when I did meet her, and I was pulling double-duty, doing another show at the time too, so we didn't cross paths often... Really the only thing I remember saying to her was that she reminded me of Felicia Day (from Dr. Horrible's Sing-a-long Blog). It wasn't until she had a cast party at her house at the end of the production that we actually had a conversation. The party was “Bacon” themed, and she recruited me to help her wrap assorted foods in bacon. It was during those first hours of the party, hanging out in the kitchen with her, that I was smitten.

I know Kasmira doesn't keep track of awards, but I tagged her for one if she wants to stop by and pick it up!!
Retro Reva

Awwww, thanks for answering my question. I love that answer. :)

Aww, I'm so happy for you guys! And I love that you're so supportive of her having so much fun with her wardrobe that you even help with her outfit photos!

Wow- great Q and A, but Kasmira- I've been following you for a while...I was under the impression you were married? Didn't you post your outfits from your husband's law school graduation...or did I hallucinate that?

This is awesome - she seems like such a cool chick and you guys sound like you have a lot of fun together. And yes, I like your blog too - I enjoy obscenities and ellipses.

This was fun !
Thanks for answering the Q's beefy -

Kasmira- Sorry to hear that. But it sounds like you're having fun in your new relationship! :)

sanjeet said...
This comment has been removed by a blog administrator.
4:53 AM

I would like to ask, when did you let each other know about your blogs? Or did you know about them already before your relationship began? Did you formally "come out of the closet", or did it just pop up naturally? And most interestingly: If you knew about your blogs before you hook up, what did you think of them or the other person??

Thanks already in advance, if you'ss shed some light on this for me, nosy nosy me. :)